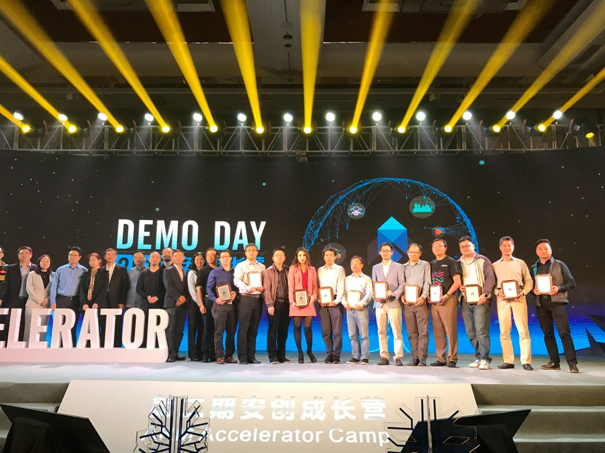 TrustKernel was Invited to Demo Day Held by ARM Accelerator

Demo Day was successfully held by ARM Accelerator in Shenzhen on December 13, 2016. As one of the members of the second ARM Accelerator Camp, TrustKernel took part in this activity with our product “TEE solution”. During the show, TEE caught the attention of investors, media and partners from industry chain. 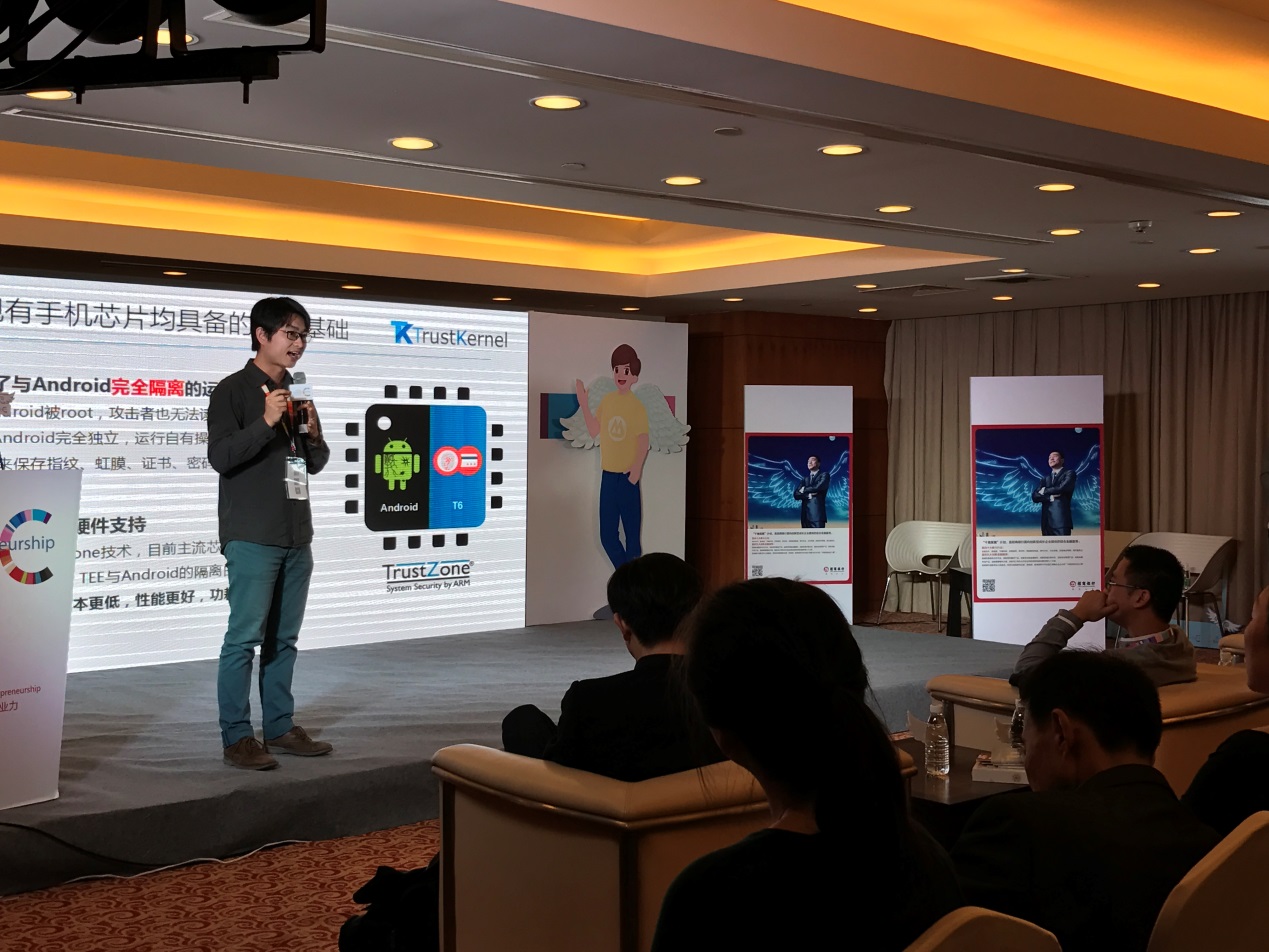 2016 Global Entrepreneurship Week China has ended at Nov. 20th. Nearly hundreds of activities were held in this fair with more than 12000 people attended. Participants were enterprise incubators, investors and entrepreneurs from all over the country. 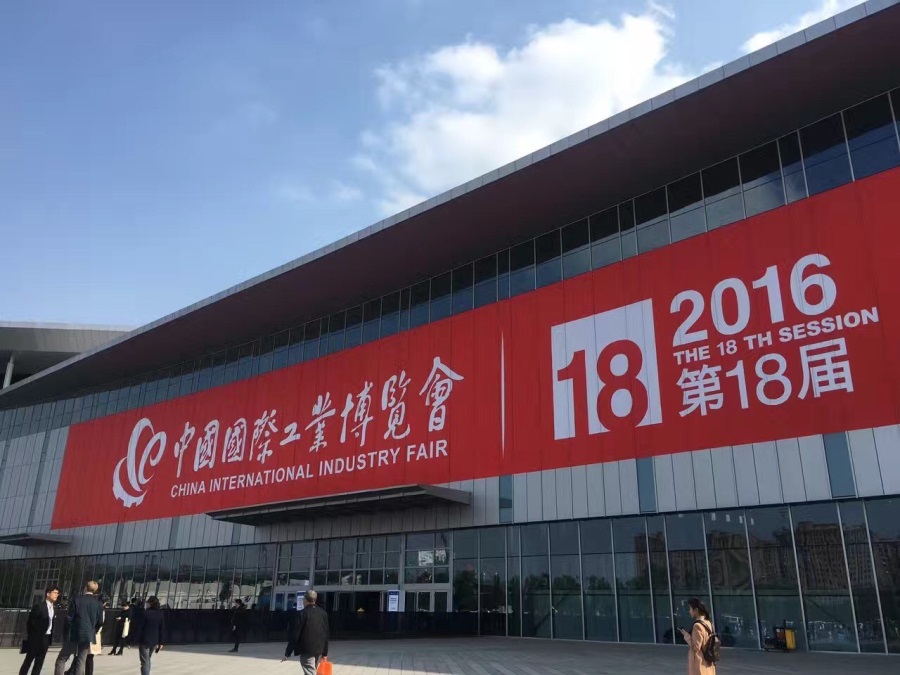 November 1st to 5th, the 18th China International Industry Fair (CIIF) was held in Shanghai National Convention and Exhibition Centre. TrustKernel, as the Outstanding Winner of the 14th National Challenge Cup, was invited to display in the college innovation and enterprise exhibition area. 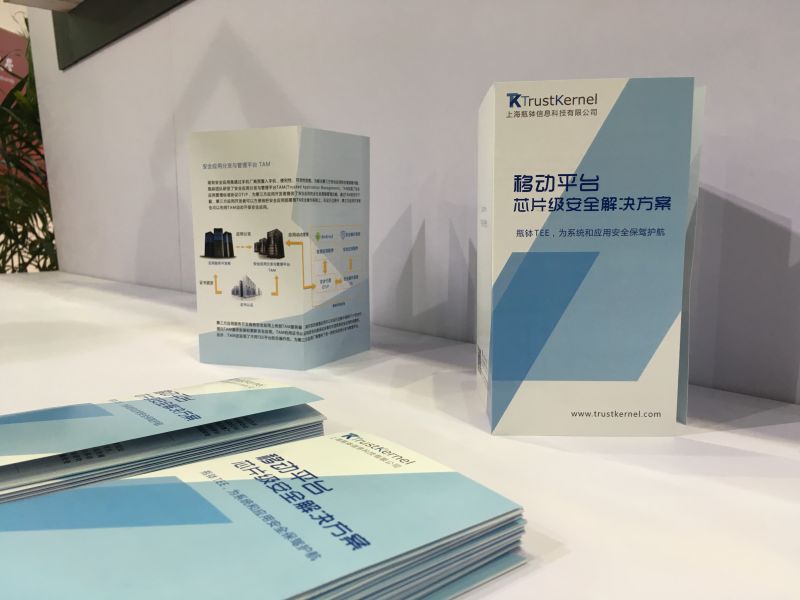 TrustKernel was invited to World Internet of Things Exposition

World Internet of Things Exposition took place in Wuxi from Oct. 30 to Nov. 1 this year. TrustKernel was invited to the promotion showcase in product exhibition area by ARMaccelerator. 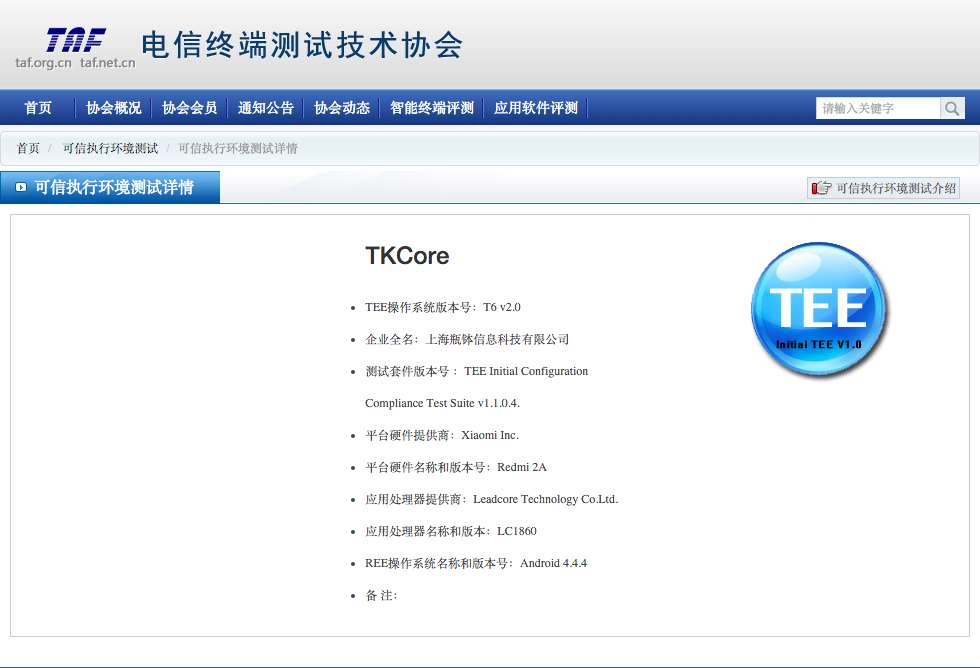 TrustKernel TEE Has been certified by TAF

With the booming development of mobile Internet and the widespread use of mobile payment and biometric security identification, users and industrial community put more emphasis on mobile security. TEE (Trusted Execution Environment) from ARM TrustZone, hardware-based security technology, has now been widely deployed to mobile terminal under the impetus of GlobalPlatform (GP).

TrustKernel joins IFAA recently, which helps us a lot on supporting Alipay (支付宝) in our TEE. IFAA (Internet Finance Authentication Alliance) is founded by AntFinacial in June 2015. IFAA aims to build the standard of biometric technologies including fingerprint, iris, face and so on. The alliance includes hardware and software manufactures like Huawei, Samsung, OPPO, Coolpad, Qualcomm, etc.

TrustKernel's TEE has been deployed on XiaoMi Phone (LeadCore Platform) successfully. The TrustUI, or TUI, is incredibly flexible. An developper can use our TUI-SDK to make a trusted application in hours. The performance is also superb that user can hardly feel any lag during operation. Besides its abundant interface, our TEE-SDK also support GP's TUI interface. The demo video is here.

TrustKernel is Invited to Present TEE, SGX and Virtualization on FSI 2015

TrustKernel is invited to give a presentation on FSI (Future of Security Innovation) forum in Shanghai, 26th Nov, 2015. The talk is about how TEE is applied on multiple platforms, from mobile devices to cloud computing. The presentation compares ARM's TrustZone, Intel's SGX (Software Guard eXtension) and virtualization technology, and discusses their advantages as well as limitations. The slides can be downloaded.

TrustKernel is invited to give a talk on TEE trends on the conference of payment product authentication, testing, attack and defence, on 22nd May, 2015. This talk shows how TEE is used in current mobile devices, how it can improve the security level of HCE payment and FIDO, and several security issues on commodity TEE implementations. We also introduce our TEE implementation, code name T6, and show its advantage on physical attack protection and REE security enhancement. We also give a brief introduction on how virtualization technology can be used to improve the flexibility of TEE. The slides can be downloaded. 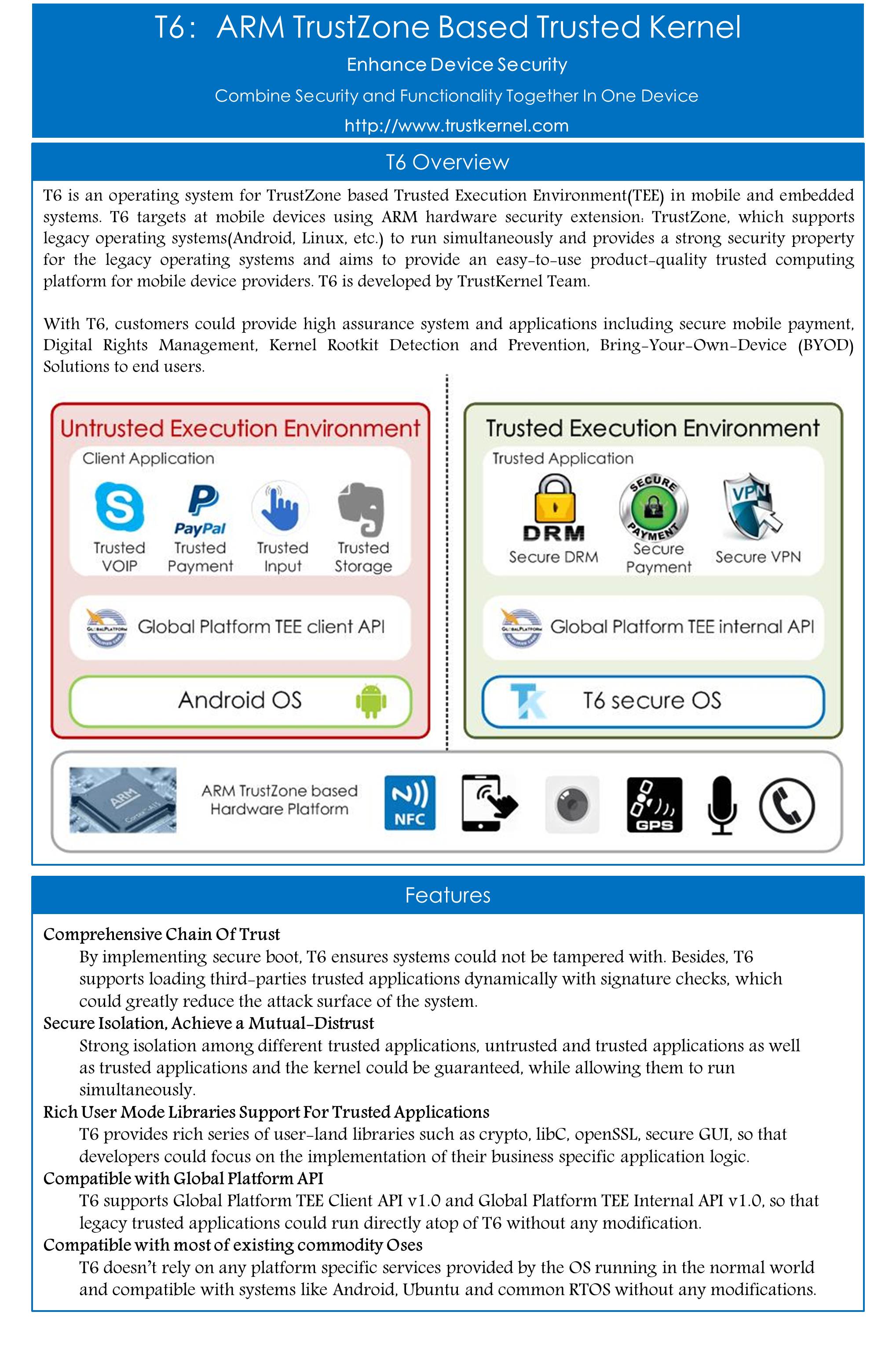 Trustkernel publicly announces T6, a systematic security solution based on ARM TrustZone Technology, which is compatible with mainstream ARM platforms on the market. T6 guarantees both security and functionality in one device. T6 is an operating system for TrustZone based Trusted Execution Environment(TEE) in mobile and embedded systems. T6 targets at mobile devices using ARM hardware security extension: TrustZone, which supports legacy operating systems(Android, Linux, etc.) to run simultaneously and provides a strong security property for the legacy operating systems and aims to provide an easy-to-use product-quality trusted computing platform for mobile device providers.

TrustKernel's TEE has been Certified by Security Authorities

On April 20, 2015, TrustKernel's TEE T6 has been certified by security authorities: MPS Information Classified Security Protection Evaluation Center and The Ministry of Public Security Information Security Product Evaluation Center. The report is to certify that TrustKernel's TEE named T6 has meet the highest security level in mobile devices. Previously, T6 has been announced to support all standards of Global Platform TEE API Specifications.

On February 4, 2015, Global Platform releases the GlobalPlatform Device Technology TEE Sockets API Specification v0.0.0.22 for public review and within two days TrustKernel announces the availability of T6 TEE SDK that is compatible with the newly GlobalPlatform TEE Sockets API Specification, which indicates the rapid action of TrustKernel on security standards. The specification contains a suite of detail specifications that provide standards to enable a Trusted Application to directly make use of internet protocol interfaces, rather than send packets to a client application for internet transfer.